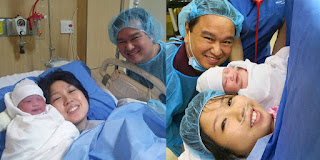 Whenever people would ask me the question, “how are you giving birth?”, my answer would always be, “normal, not natural!” That’s because I am terrified of giving birth without any epidural, and I really do not want to be cut open.
My water broke when I was only two centimetres dilated with my first born so I had to be induced. three going on four centimetres was the worst pain I had ever felt in my life so I opted for the epidural as soon as my doctor said I could have it. While I labored for 15 hours total, delivery was very fast. In fact, my sister recounts the memory by saying that I crapped out my first baby girl.

Meanwhile, I had a totally different experience with my second. I came in for an ultrasound and discovered that my baby girl had a loose cord coil around her neck. My doctor told me not to worry, that many women still deliver babies the normal vaginal way with no problems. But since baby was getting bigger and I already had my own contractions (though irregular), we could already augment with oxytocin to make it more regular. I was excited! Sleeping and moving had been very difficult, so I just wanted to give birth already.

I had been in labor for 8 hours already. Baby was ready to descend but I was not dilating fast enough causing her heart rate to drop to the 70s every time I would have a contraction. It was already 11:30 pm and it seemed i would not fully dilate til around 2:00 am. My doctor was worried about the baby so I took her advice to just quit while we’re ahead and go for an emergency C-section.

Honestly, I was terrified! I really did not want to be cut open. But I was more worried about the safety of my baby girl. At 12:23 am, my dear Baby Caris was born.

People ask me how different normal and c-section deliveries are since I had experienced both. My answer, completely different! There are pros and cons to both.

I still prefer a normal delivery. While labor pains are literally a pain and sitting down is difficult for the first week of recovery, the healing time is faster. I remember walking to the bathroom to pee the night I gave birth. I could shower on my own, I had sushi for dinner the next day, I was very mobile right away. And a big plus was being able to enjoy skin-to-skin with my newborn the moment she came out of me. 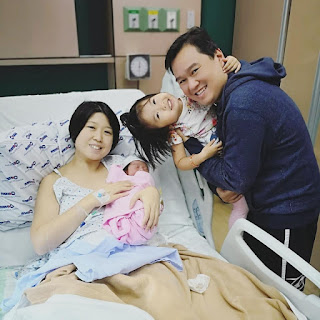 C-Sections are a different story. A planned C-Section would have been very convenient as I would not have had to go into labor anymore. But because the epidural is on a whole different level, I just felt groggy the whole time, like being in the theta state where you are half awake and half asleep. I felt like a frog on a dissecting table but could not feel a thing. I was tiredly excited to hear my newborn’s first cry, but I was too groggy to appreciate the skin-to-skin bonding and first latch. Come to think of it, I don’t really remember much of what happened because I was knocked out after that. I also didn’t realize that stitching me up took so long that I didn’t go into the recovery room until two hours later.

I think the worst part about a c-section is having to stand up the first time after they remove the catheter. I felt like my top half was going to split from my bottom half, like a manananggal. No kidding! And unlike my normal delivery where I was up and about from the get-go, walking with a bikini cut takes the mobility away from you.

While I am recovering nicely (I can now go up and down the stairs, shower on my own, do photo shoots of my daughters), I still tell those who ask me what I prefer that I would choose a normal vaginal delivery any day. That is how God intended it, after all.
at July 12, 2019