From Tantrum Two to Testing Three 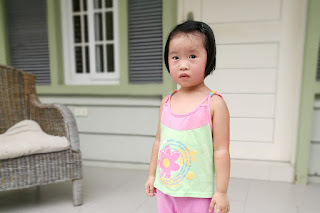 Before I had a child, whenever I meet sweet toddlers for the first time and let their parents know how wonderful their child is, they always say, "You don't know terrible two!"


Luckily for us, my little girl was not such a terrible two. She had her share of tantrums when she couldn't do what she wanted, but she was never truly terrible compared to other two year olds I've witnessed. In fact, people have always commented on what a good girl she was. For the most part, she is a good girl.

But as she approaches three, my husband and I noticed a change in her. A term I learned recently is “Threenager”. Whoever came up with that was correct. With more knowledge and awe of the world comes a stronger will-power in her. She suddenly has moments where she tests our patience and perseverance just like an angsty teenager.

Things that are routine for her, like packing away after playing, brushing her teeth before she sleeps, drinking her vitamins, and praying before meals are things she has begun to question and refuse to do. She also has moments where she does things on a whim, like throw my book and kick the electric fan, and after we reprimand her sends us into a battle of wills.

How do we deal? Consistency is key. It's a very tiring battle to fight. There are times when it just feels so easy to give up, call it a day, and get some rest. But doing exactly that will put the power in her hands. I believe in discipline, and i believe that parents should always uphold their stance in that tiresome battle.

Recently, my little girl was banging on our screen door which was creating a loud thunderous sound. Her dad went up to her and calmly told her to stop because it was agitating our dog and the sound was really not pleasant. She grudgingly stopped and followed it up by kicking our small electric fan, which fell face flat on the floor. We told her that her actions were not what a good girl would do and that she should pick it up. We also told her that she should remember to take care of our things at home and not destroy them. She refused to pick it up. After repeating several times that she should pick it up, she began her screaming and crying and asking me for help.

We acknowledged that she may be angry that she was told not to bang on the door, and we asked her how she felt but she refuse to answer. She continued to scream.

I also believe that when it comes to parenting, my husband and I are a team. There should not be a bad cop and good cop. So i went to her and said that it was not difficult to pick up the fan, it was easy, and she should learn to be careful with our stuff. She refused and cried some more. I also believe that it is important for her to learn that she cannot get what she wants by crying.

And so continued our long battle. We told her that we can stay there all night until she picked the fan back up. We even told her that it was not difficult, that it was easy. All she had to do was bend her knees and put it back up to it's standing position. And finally, after a few more minutes, she did.
I guess she realized that it was, in fact, easy. She may have even thought how foolish our argument was. She finally went upstairs and took her shower, came into our room, and said sorry.

We've had other situations along that line and my husband and i would really stand our ground. We And in those situations, like with packing away or brushing her teeth, she has never argued with us in those departments again... so far.

Consistency is key! And I always tell my daughter after one of her episodes (even if she may not completely understand), when it comes to battles like these, Mommy ALWAYS wins!
at September 20, 2018