Why I Love the Munchkin Miracle 360 Cup 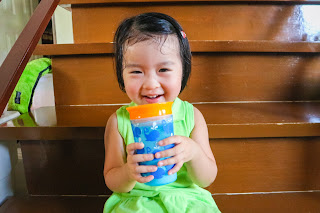 I rarely rave about sippy cups and stuff (to me they are all the same and my toddler doesn't like them), but I have never met a cooler cup for babies than the Munchkin Miracle 360 cups. Here's why...


My baby girl went through the first year of her life directly breastfeeding. As a photographer, my schedule was about shooting for clients for a few hours on a weekend, and the rest of the time was spent at home post processing photos. This setup gave me most of my time to spend with her to breastfeed. And when I had to be away, she drank my pumped milk from a bottle. 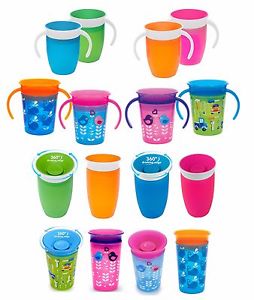 After she turned one, she drank less from me and more from the bottle, until she eventually weaned herself from the breast completely. But by the time she turned two, her pedia recommended for us to wean her from the bottle as well, and let her drink from a sippy cup or straw cup instead, or better yet, a glass. And this is where our battle with the bottle began.

My little girl would drink water, juice, everything from the glass... except for milk. I guess it was comforting for her to drink from her bottle while lying down and playing with her belly button. We tried giving her different kinds of sippy cups and she just hated them.

Until one day, I saw a friend's 8 month old son drinking his milk from a spoutless cup while he lay on his yaya's (nanny) arms. I asked the yaya what kind of sorcery she was using that allowed the baby boy to drink his milk while lying down, without the milk spilling all over his face. Her answer, the Munchkin Miracle 360 cup. And she was raving about it. She mentioned that this baby boy never liked his bottle and would only drink from his mother's breast or a cup. She excitedly told me that they have it in many colors and that it can be purchased in any branch of Mothercare. 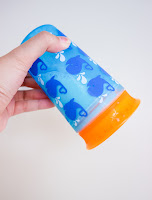 I took a trip to Mothercare and went crazy over the different kinds of 360 cups. There are 7 oz. cups with handles for babies 6-12 months, and 10 oz cups without the handles for babies 12 months and up. They even have it in deco designs, with and without handles, in both 6 and 9 ounces. They also have it in stainless steel.

I bought one of the 9 oz deco cups (my little girl's choice) to give it a try, in case she didn't like it. She did. I even tried drinking from it myself to understand how it works. It's awesome because even if you flip it over, whatever liquid inside absolutely does not spill. The liquid only comes out when lips touch the valve of the cup and is sucked out, then resealing itself when the child's lips are no longer touching the lid. It's called 360 because you can drink from any side of the cup and it won't spill. Definitely a miracle. My little girl found it weird at first but she found herself drinking from it quite fondly. 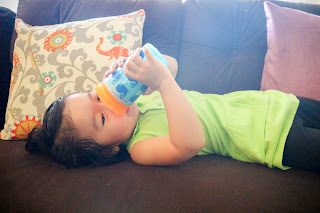 What I also like about it is that it is dentist approved. I don't have to worry about her constantly biting a nipple which could ruin her teeth. The parts are also detachable so it is easy to clean every part of the cup without worrying about molds forming in hard to reach parts. And it's BPA free!

So if you find yourself looking for a trainer cup for your babies or toddlers, I highly recommend this. It's perfect for teaching babies to drink from a cup, for weaning toddlers from the bottle, and it's mess free! It's a brilliant invention and I wish I had learned about this when my daughter was just an infant.
at July 25, 2018