No More Milk At Night 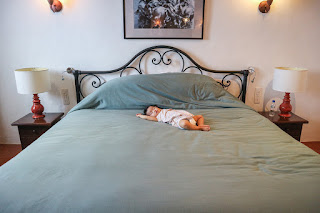 Every time I look back to the days when my little girl was still a newborn, I always think about our life now and how much easier it is. We’ve come a looooong way from waking up every two to three hours to breastfeed. In fact, we’ve managed to wean her off the night time bottle feedings and, somehow, get a good night’s sleep.


Our little girl usually goes to sleep in her crib and wakes up sometime in the middle of the night because she wants to transfer to our bed and cuddle, and just fall right back to sleep in my arms. That short moment where I get up to pick her up and take her to our bed has been something I’ve been doing on autopilot for the past few months that it does not bother me anymore and does not seem to put a dent in the quality of my sleep.

But a few times lately, we’ve had nights where she wakes up asking for milk. It’s really a headache to wake up from good sleep you have already gotten used to, but this is something we have to deal with if we want her (and us) to sleep well through the night.

Our pedia had advised us to wean her from night time feedings by the time she turned 18 months because leaving milk resting on her teeth can lead to cavities. And we have been able to do just that by her 20th month by refusing to give her a bottle until she stopped asking for it.

Normally, when she wakes up asking for milk, I would just cuddle her and remind her that we no longer have milk at night, and she would go back to sleep. Last night was a different story. She suddenly awakened from her sleep and asked for milk. I did what I would normally do, but it didn’t seem to sink in. She relentlessly kept asking for milk. After telling her repeatedly to go back to sleep, she started crying. By this time, my husband had also awakened and was helping me to soothe her, to no avail. She suddenly asked to go to her crib. I put her there and she cried some more and asked to go back to our bed, and then asked for milk again. We went through that cycle around three times, neither of us giving up.

On nights like these, I just get soooo tempted to give her the bottle so I could just go back to sleep. But doing so will undo months of training we have worked hard to achieve. Giving her the bottle on the nights she cries for it will only make her think that if she cries for something until we are exhausted, we will give in to her. And that goes for anything that she may ask for in the future.

So, tough love, baby! She asked for her “baby”, Funshine Bear the Carebear, and we gave that one to her. But when she asked for milk again, the answer was, “Remember, no more milk at night because it is time to sleep. You can drink milk when you wake up in the morning.” 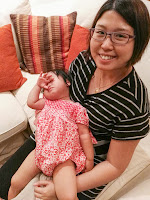 I’m not quite sure if she processed that. But when she realised we wouldn’t give her the bottle, she kept turning from side to side, hugged her dad and me, and just miraculously went back to sleep.

She awakened this morning like nothing happened. My husband and I were very sleepy but we couldn’t help but give each other a pat on the back. A difficult night of teaching a lesson can go a long way in child’s development. We might be sleepy today, but hopefully we will sleep better in the coming months. Cheers to parenthood!
at January 08, 2018