Once upon a time, we lived in a world where having dinner together as a family was just as important as going to school or work. Weekend lunches were just as sacred as going to Sunday mass, and something as simple as going to the grocery with mom was like a walk in the park on a sunny day.

Times change and we have somehow found ourselves living in a world where the pressure of school and the stress of work has caught on to everyone. While family time is still very important, that was it. Everyone, even kids, have become so busy with other things that we sometimes forget to create new memories. Traveling together is always a great escape and great way to document new and exciting memories. But what happened to good ol’ picnic at the park?

When my husband and I learned that I was pregnant with our little girl, we decided to be the kind of parents who would indulge our child in exciting things. I don’t mean new toys or gadgets. I mean the occasional “Surpise, daddy brought home pizza!”, movie night, or play date with the cousins. We wanted her to have experiences that she will remember and cherish until she grows old.

A simple memory I have with my own mom was when she took me to the park to help me memorize a poem I needed to recite for school entitled, “The Swing”. I was having the most difficult time memorising it. My siblings and I are usually not allowed to play until we have finished our homework or are done studying for the next day. But this little gesture enabled her to help me memorize the poem while I was riding the swing. I don’t remember the poem anymore, but I remember that specific trip to the park that brought me so much joy.

I even have memories of her taking me to the construction site of the house I grew up in. Back then, we were living with my grandparents, so this got me excited to have our own house and have my own room. Nowadays, it is unheard of to bring a child to a construction site. But for me growing up, it was a treat.

I also remember those afternoons where she would pick us (my sister and I) up from school. Our yaya (nanny) would usually pack us a sandwich to eat in the car as we go home. But there would be afternoons when she would arrive just a little bit later than usual and surprise us with a pizza. That made waiting so worth it.

And so I decided to do the same with my little girl. 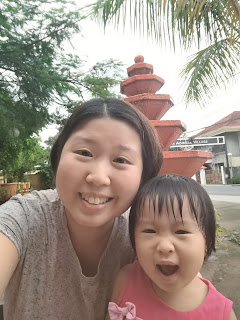 On afternoons, when she wakes up from her nap, she usually goes for a walk around our village. One afternoon, I just decided to take her further down the street, outside the village gate, and into the cafe just outside. There was a look of excitement on her face because this was something we didn’t normally do. She went around the cafe making friends with the waitresses, admiring the decor, naming the animals that were part of the decor, and singing as we ordered a banana shake and some fries. We had our merienda (afternoon snack) together while she continued to sing her favorite songs. After which, I let her play in the courtyard. Her dad was home when we arrived back and she excitedly told him what she ate and what she saw.

She may be too young to really remember, but the gesture of something so spontaneous was enough to put a smile on her face, something that will stay in her subconscious until she is reminded of it when she is older.
at January 26, 2018