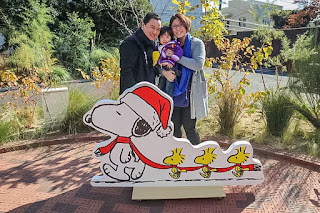 We recently came from a trip to Tokyo with my side of the family. We were a group of around 20 people and it was filled with shopping, eating, and just plain fun. We took our two year old on the trip with us. She instantly loved the cold weather, the fried rice, the sights and sounds, and simply being with everyone.

Unfortunately, after spending our first day of going around the city, she came down with a cold, cough, and fever. Her body must have been shocked by the sudden change in climate. We jumped from the sunny to rainy 31 degrees Celsius of Manila to the high of 14 and low of 6 degrees Celsius of Tokyo. Our baby girl had to spend two days just resting at the hotel to avoid a relapse. Lucky for us, my fairy godmother sponsored our yaya’s (nanny) trip to make my life easier, so my husband and I could still go around during those two afternoons.

But when she was well, we took her out with us to our must sees and must dos. The verdict, while I really, truly love Tokyo, it’s not a very easy place to take a child for vacation. At any rate, because of the people, they make getting around a little bit easier.

We flew via All Nippon Airways (ANA). Unlike most airlines, ANA doesn’t put an extra charge on the bulk head seats so we were very happy to have secured them. Since my daughter is already two, we didn’t have to worry about getting a bassinet seat or not having enough space. She had her own seat in between my husband and myself, with her own meal, with enough luggage weight and space for everything she would like to take home. 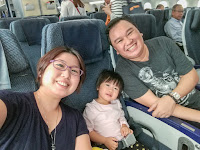 The flight attendants of ANA are some of the best I’ve ever met. They are especially friendly to kids and make sure that the parents are comfortable throughout the flight. During the initial landing, my little girl was unfortunate to experience (for the first time) pressure on the ears which caused her some pain. We let her have her milk bottle to make sure she would keep swallowing. Meanwhile, the flight attendants were all very concerned because she kept crying. They took their turns providing ways to make her feel better and lessen the pressure on her ears like putting a cup with a wet warm towel, giving her some juice, giving her a toy to take her attention away from the discomfort. I really appreciate all their care and concern. A definite plus for All Nippon Airways!

I have never met a more genuine and kinder race such as the Japanese. At the airport, my little girl was feeling very tired and nauseous from the flight. While waiting in line at the immigration, she vomited. People immediately rushed to our attention. One lady gave us a plastic bag to let her vomit into, another immediately handed wet wipes to clean her mouth and clothes. And while we were trying to get out of the line, a man removed the cordons of the snaking line to make our way out and into the nursery faster and easier.

On another day, we were at a ramen place in Akihabara for lunch. Prior to that, we rode in the van that my fairy godmother had rented. She must have gotten nauseous during the ride (we were sitting at the inner seat at the back). She was very fussy all throughout lunch. My little girl with a normally very hearty appetite didn’t want to eat. An old lady at the table next to us noticed that she wasn’t feeling very well came to us and gave a pack of chewable candy. We thanked her for her kindness and let our daughter have some candy. And when she felt better, the lady fished for another pack of a different flavor from her bag and gave it to us before she left. I really appreciate the kindness of people in Tokyo.

If there is one thing I keep tabs on wherever we go, it’s the baby nursery. Not an area in the ladies bathroom with a pull-out changing table, but a real baby room with a cushioned changing table so that dad can help mom change up the baby, a couch to sit, a hot water dispenser, a lactation area, and other things you need to help make cleaning baby up more efficient. They have it in the airport, at the malls, at the train stations… It just makes life so much easier!

Dealing With A Sick Baby

It’s not fun to have a sick baby, more so when you are traveling. Because I can be a paranoid mom, I had my stash of homeopathic remedies and over-the-counter medicines. However, since my daughter had the flu shot two weeks prior to leaving for Tokyo, we were advised by the pedia to NOT give paracetamol if she gets a fever because it will nullify the effects of the vaccine. Like always, I relied on my homeopathic remedies to get her on the fast track to good health. 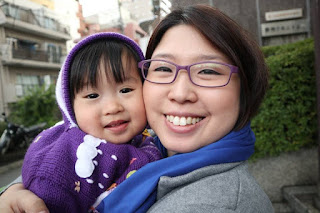 But that wasn’t the difficult part. Getting sick and getting left at the hotel turned her into a clingy toddler. When her fever had completely gone, we had started to take her out again. But for most of the trip, I had to deal with a toddler who didn’t want to sit in the stroller and wanted to be carried ONLY by mommy. During meal times, she would refuse to sit on the baby chair and insist on eating while seated on my lap. How did I deal with it? I was reminded by my fairy godmothers to take advantage of this phase in their life. When they hit a certain age, they will not want to be cuddled anymore, so make the most of it. And so I did!