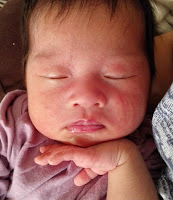 Have you ever heard the phrase “smooth as a baby’s bottom”? When my baby girl was born and we would do diaper changes, I would always say that she had the cutest little butt. It was like a cherub’s bum, small and fluffy. And while my baby’s bottom was smooth as the saying goes, ironically, the rest of her body was not. Like many other newborn babies, my little one had cradle cap and baby acne that spread to the folds of her neck.

Cradle Cap or infantile seborrheic dermatitis (similar to atopic dermatitis) is flaky, dry skin on the baby’s scalp that looks like dandruff. It could also manifest itself as yellowish and oily or brown and crusty. In some babies, it also shows up on the eyebrows or in other creases of the body. (Don’t worry, mommy! Cradle cap is not contagious and it is not caused by poor hygiene or allergies.)

I didn’t really worry so much about it. I was just wondering if it was causing my baby any discomfort. Meanwhile, I felt this urge to run my fingers through her scalp and scrape off the crusts of white flakes building up.

I took her to her paediatrician and she explained that it is very common in newborn babies, usually caused by the hormones of the mother during pregnancy though this is not scientifically proven. It can be left untreated and will just go away before the baby turns six months old. She recommended washing the baby’s hair with shampoo on a daily basis to prevent a build up of oil.

In the case of my baby girl, we learned that not all shampoos worked well for her. There were some that, even if they were marked as baby shampoo, were too strong for her and ended up producing more crusty flakes. We found Johnson’s Baby Shampoo to be gentle enough for her scalp, but what ultimately calmed the production of the cradle cap was Mustela Gentle Shampoo.

While it lessened significantly, it didn’t completely go away. And because my EQ is low where my baby’s well being is concerned, I took her back to her doctor. Thank God for mother’s intuition. It turns out that my baby girl had some kind of fungal rash that was causing acne or what I thought was acne to spread to her neck and under arms. Her pedia prescribed Tar Bar Soap (Polytar) to be massaged onto the affected area of her scalp and leave on for 5-10 minutes before washing. She also prescribed Lamisil (terbinafine cream) to be applied on the folds of her neck and under arms after bath. The cradle cap eventually went away. As for the baby acne, it lessened, but was still there.


Every time we go for a checkup, her doctor would always marvel at how smooth her bottom was. So finally, she asked what it was we were putting to keep it that smooth and spotless… Mustela Vitamin Barrier Cream, what we apply after every diaper change, worked wonders on my baby girl’s neck and underarms and soon the rash and acne disappeared. As for the acne on her face, we put the Mustela Stelatopia which restores damage to atopic prone skin.

We applied these diligently for about a month or two until the cradle cap and baby acne completely went away.
at July 04, 2017